Running Fast Toward Sustainability – Businesses Get Bold in Their Climate Work

From time to time people ask me if it’s not too heavy a burden to work with climate issues, as it is such a depressing topic. I always answer: On the contrary! Together with the companies in the Swedish sustainable business network the Haga Initiative, I work with companies that want to decrease their climate impact and contribute to society. They have noticed that their efforts are profitable and each day I hear an overwhelming amount of success stories, including: major energy-efficiency efforts, investments in renewable energy, transition to climate-friendly transportation, green bonds, saving energy via 3D printing, and improved recycling systems. Further, the companies I work with have all committed to reaching zero net emissions by 2030. There is clearly no shortage of good examples regarding climate action.

Recently, the Haga Initiative published a report called Climate Action Profitable. The report firmly concludes that companies working with sustainability on the highest corporate level are more successful and create more value for the company, as well as wealth and growth for their country. This is the Swedish experience—sustainability and climate efforts have become success factors in our business community, not least in terms of international competitiveness. However, we are still forced to deal with the lingering misconception that emission reductions are difficult and costly. As the executive director of the Haga Initiative, it is my role to continuously combat this misunderstanding. The Haga Initiative’s vision is to achieve a profitable business sector with positive climate impact. And we know that it is possible. Our experience shows that emissions can be reduced faster than anticipated and that clients as well as owners and investors appreciate this direction.

This spring, we asked 300 major companies in Sweden how their climate efforts affect their profitability. The answer we got was unflinching: Swedish companies see great benefits in climate action. A clear majority, regardless of industry or company size, believes that climate action translates to more loyal customers, increased innovation, and increased ability to attract and retain talented employees.

The obvious conclusion is that every company would gain from having an ambitious climate strategy. In my opinion, this should be on the front page of every newspaper in the world. However, the dominating image when climate issues are reported in the media is one of impending doom and the total annihilation of humans as a species. No wonder people become more apathetic instead of taking action. It is my clear conviction that we can only reach a solution to the climate crisis if we focus on communicating the thousands of positive examples of climate-change mitigating efforts from all over the world.

To be able to manage this and get the energy needed to achieve the climate transformation, we all need to be in an environment characterized by contagious good examples. Who can muster up commitment when all you hear is that recycling doesn’t make a difference or that we only have a hundred years left on this planet? Stop with the negativity, I say!

I would urge companies to instead be bold and talk more about their climate efforts. Many restrain themselves as they worry that they have not delivered on all climate aspects and thus will be accused of greenwashing. This contributes to the illusion that the development is slower than what it is. If companies talk more about their climate efforts, more people will realize that climate action is positive; it will give us hope and make us run faster towards a low-carbon society. 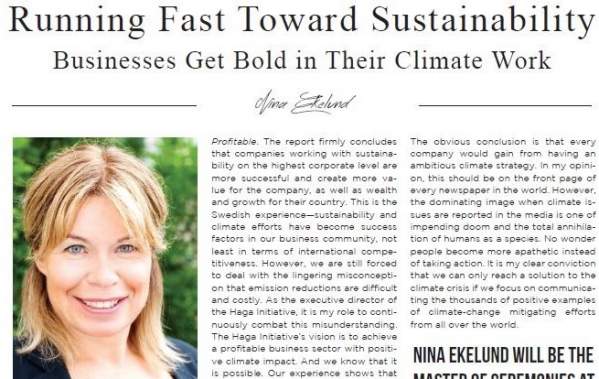